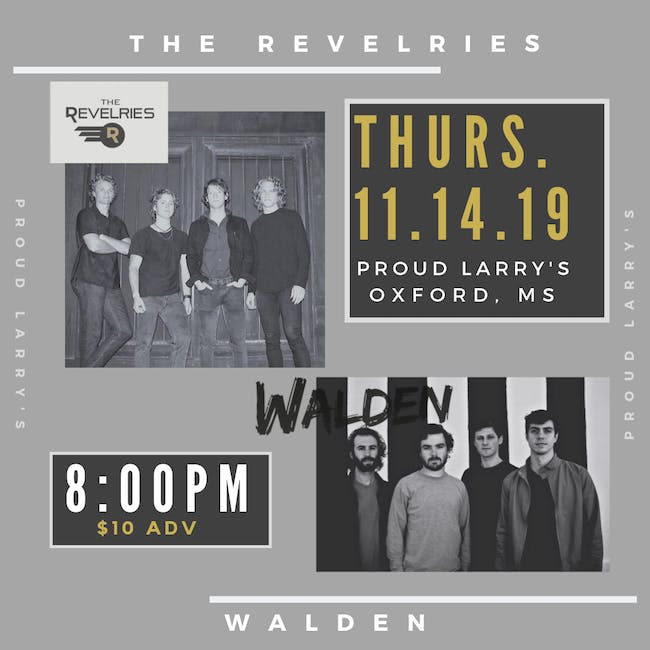 The Revelries and Walden

iCal
Google
The Revelries and Walden at Proud Larry's

Born out of Baton Rouge, Louisiana, The Revelries bring full sounding, guitar driven rock straight to the alt rock scene. The group has an original sound influenced by bands such as Catfish and the Bottlemen, Kings of Leon, and John Mayer. The band released their first two singles “Blonde Hair. Blue Eyes” and “Abbot Kinney” in 2018. The singles landed them on countless Spotify curated playlist launching them into the scene. Following the debut singles the group released their debut EP 'After 7'. Opening for artist such as Moon Taxi, Wilderado, and Weathers the band is on the move.

In late 2012, four schoolmates joined together to form something that would become much larger than the sum of its parts. Hailing from Athens, Georgia, Walden emerged as the city’s newest rock sound. The band quickly captured the college town’s attention, taking them from a debut performance at a Pizza Hut to a headline show at the historic Georgia Theatre just two years later.

Comprised of Richard Becker (vocals/guitar), Jamie de Lange (bass), Eric Hangartner (vocals/piano) and Andrew Mendel (drums) the quartet has remained just that ever since. While each share a dream of traveling the world creating music, they are drawn together by a common understanding of what’s truly sacred: the band.

6 years after its inception, Walden has burst onto the scene with many major festival appearances, including two years in a row at Bonnaroo, a main stage performance at Sloss Music & Arts Festival, as well as directly supporting names including Moon Taxi and Twiddle. These four young men have quickly become one of the biggest upcoming musical acts in the southeast, capturing the attention of audiences of all ages with their raw sound, infectious energy, and the undeniable connection they share on stage.

Walden’s new EP, The Static, chronicles the band’s attempt to navigate through the perpetual noise that pervades everyday life in search of something else—something of true purpose and meaning which brings one a sense of truly feeling alive. The Static will be available everywhere April 5th, 2019.