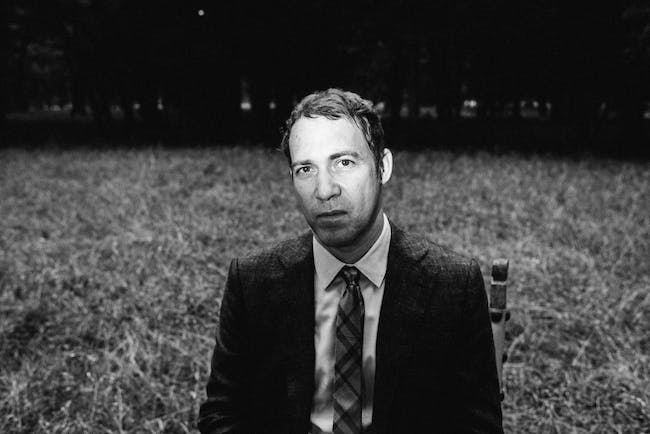 Invisible Lines makes an apropos title for the solo debut from JM Stevens. The Austin- based songwriter who fueled Moonlight Towers through 15 years, four albums and thousands of miles crisscrossing the country on shoestring tours has a knack for tapping the intangible elements of pop songcraft that elevate the enduring from the ephemeral.

What Stevens leaves out of his songs is almost as important as what he puts in. There’s no instrumental derring-do or insular lyricism. He’s wise enough to know not to let musical ego get in the way of a good hook. Stevens would rather have you humming along and connecting with the songs on your own emotional terms.

“Where the complexity comes in is the texture you put on them and the feeling as opposed to the inner-workings and gears,” he says. “I want to create more of an overall picture in a song.”

The West Point, Mississippi native grew up against a backdrop of competing priorities. Stevens’ father was a small-town lawyer. His mother an accomplished church singer and pianist. When Stevens was in high school, his older brother Rogers was selling millions of records as guitarist for Blind Melon. Guess which road won out?

Maybe the blame game starts with fellow statesman Elvis Presley, whose “Love Me Tender” is the first record Stevens recalls hearing. Or “Wagon Rock,” which is what Stevens calls the Top 40 radio staples he heard while riding around in the back of his parents’ station wagon.

“I started playing piano when I was about 8,” Stevens says. “Then I decided I wanted to switch to guitar because I wanted to learn John Cougar’s ‘Pink Houses.’”

Despite living a stone’s throw from Howlin’ Wolf’s birthplace in the cradle of American popular music, there wasn’t much going on in Stevens’ hometown. So he made his own scene. At 12, Stevens started a band called Aces High. They learned covers and eventually started booking their own shows in whatever decidedly unconventional venues were available.

Like many Eighties-era youth living in smaller towns, Stevens discovered life beyond MTV and commercial radio through skateboarding and a Thrasher magazine subscription. His musical lexicon went further afield bit by bit, first to gateway bands like

the Cure, Violent Femmes and Metallica, then to SoCal punk titans like Black Flag, Descendents and the Dead Kennedys. “We had a tight-knit group of friends who felt like it was our own thing,” he recalls.

At age 16, Stevens almost died when the truck he was in got hit by a freight train. The rail crossing on the outskirts of town had no gate or signal and was obscured by overgrowth. Stevens didn’t see the train until it was just a few yards away. It smashed into the passenger side door Stevens was sitting next to, pushing the truck down the tracks and into the woods.

“The word on the street was that I was dead,” he recalls. “One of my friends heard about it over the AM radio news station.”

In a split second, Stevens went from being a high school kid on his way to Sonic to being pinned inside a crumpled-up truck, fighting for his life with too many broken bones to count. After being painstakingly extricated from the vehicle, he was rushed to the emergency room.

“I was in massive pain,” Stevens says. “I broke both femurs. I crushed my skull in, broke arms, ribs. I was in the hospital for a long time and I couldn’t walk for a long time.”

With his hands relatively intact, Stevens passed the months of recovery by playing guitar. After graduating high school, he tried to make a go at college, but it didn’t take. Music was his future and he was destined to be a lifer.

Stevens’ churchgoing parents were not initially overjoyed when their two sons got swallowed up by rock music. While Blind Melon’s success ameliorated that sentiment, his dad remained the same man who once rousted his sons awake by taking a hammer to a cassette of Prince’s 1999 in the family kitchen due to the album’s lascivious lyrical content.

“He said he didn’t want that Prince trash under his roof, which of course made me want to listen to it more. That’s the kind of drama he instilled in me,” Stevens says. “He was a trial lawyer and it was brilliant. I loved that that happened. My brother met Prince years later during the Blind Melon days and told him that story. Prince thought it was fucking hilarious.”

When his short stint at college came to an end at the end of 1994, Stevens left Mississippi for a Super 8 Motel in Austin. He didn’t know a soul in town. Stevens chose Austin for its fertile musical climate, but he had an ulterior motive. While recovering from the train collision, he developed an opiate dependency. Living in Austin meant easier trips to Mexican border towns to obtain pills. Eventually the pills gave way to heroin.

“I didn’t really get too deep into it, but some of my bandmates did and it didn’t end well,” Stevens says. “I saw the writing on the wall with all that.”

Not long after deciding there was no future in addiction, Stevens purchased an eight- track recorder with accident settlement money and opened his first studio in a rental house garage. After teaching himself how to coax sonic fidelity out of two VCRs in the family barn as a teenager, he was particularly well-suited to become a proper recording engineer.

“He wrote this song called ‘You’re My Last River to Cross’ on the spot because he’d just crossed the river coming south,” Stevens remembers. “That’s how you do it. Things you see in life every day. People that you run into. The stories that they tell you.”

In 2000, Stevens formed Moonlight Towers with high school buddy Richard Galloway on drums and bassist Jason Daniels. The trio’s liberating barside serenades earned them a following at local venues like Hole in the Wall and the Parish. In the wake of their 2002 self-titled debut, Jacob Schulze went from being a fan to joining the Towers on guitar and keyboards for 2005’s Like You Were Never There.

Moonlight Towers sold thousands of copies of their first two self-released albums the hard way - by staying on the road and playing at whatever venue would have them. Austin-based Chicken Ranch Records stepped in to release 2011’s Day is the New Night. Between Stevens’ supercharged production and his extra-tight set of songs, the album caught the ears of onetime Rolling Stones manager Andrew Loog Oldham and E Street Band guitarist Steven Van Zandt, who named “Heat Lightning” Coolest Song in the World on Little Steven’s Underground Garage.

Stevens’ father passed away not long after Day was released. The more circumspectHeartbeat Overdrive followed three years later. The grayer tones of songs like “Come Back to Tara” provided aural evidence that the Towers weren’t the Jägerbombing road hounds of yore anymore. With families and straight jobs diverting bandwidth, it was perhaps inevitable that Stevens would have to put the group on ice.

“As much energy as I was spending to move it forward, it was kind of like trying to push a rock up a hill,” he summarizes.

For Stevens, the band’s inactivity coincided with other seismic life changes. He went through a divorce and began unpacking the post-traumatic stress of his adolescence. Memories of his parents’ divorce and the train collision flooded back. “That stuff goes somewhere in you,” Stevens says.

The nine songs on Invisible Lines are a byproduct of this period. With Moonlight Towers stilled, Stevens bought a new acoustic guitar and started playing solo around town. He’d

take the Tuesday night slots no one else wanted or go play for nervous fliers at the airport. The idea was simply to get the songs out there and see how they worked in front of an audience.

“If you play it live, you save six months of wondering if it works,” asserts Stevens. “Just do it in front of people. You’ll know immediately. If you fall on your face, whatever.”

The universal theme of longing provides a cohesive thread to Invisible Lines. Opener “Runaway Stare” summons upbeat resilience in the face of soul-crushing forces that “leave you nothing but dreams of a new life.” Steel guitarist Marty Muse from Robert Earl Keen’s touring band adds to the doleful indecision of “Further I Run,” while “Maybe I Love You” basks in the warmth of Springsteen-style horns arranged by saxophonist Russell Haight.

In a bid for spontaneity, Stevens knocked out the basic tracks with bassist Andrew Duplantis (Son Volt, Bob Mould, Meat Puppets) and drummer George Duron (Roky Erickson, Jon Dee Graham, Dumptruck) in just one day. The trio cut three live takes of each song with no click track. As owner/operator of EAR Studio in East Austin, Stevens is a deft hand at mix-fixing, but he resisted the urge this time around.

“There were several times when I was mixing where I was like, ‘God, I could sing this better! I can do it right now! I got the stuff right here!’” he recalls. “But I said I was going to go with a live take and that’s what I’m going to do. It’s really important to me to be able to pull that off.

“Now I hear it and I think it’s got a different energy to it. It feels connected. The lyrics feel connected to the band in a different way than if you overdub them. It just sounds more real to me. I’m proud of that. It fluctuates. It moves and grooves.”

It’s been years since Stevens had to augment music with a back-of-house food service job. When he’s not playing solo or recording other artists at EAR, you might find him playing guitar with Craig Finn on the Hold Steady frontman’s European tour. Or filling in for his brother on some Blind Melon dates in South America.

“I have no guarantees,” Stevens says. “I never know if I’m going to make any money. Part of me thrives on that.”

What Stevens does have is perseverance. Putting in the work to get his songs out there. Making the connections, one night at at time.

“I feel like what I’m doing now is what naturally comes out of me,” he says. “I’m not trying to please anybody. It’s just what feels right in my body and my soul.”