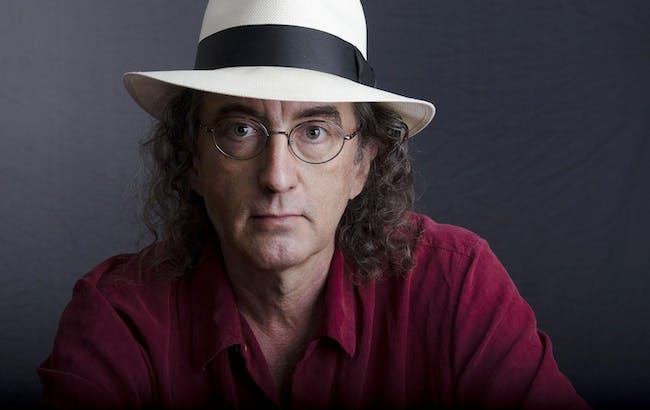 The New York Times Magazine’s cover story “25 Songs That Tell Us Where Music Is Going” (Sunday, March 12) prominently features a four-page spread focusing on James McMurtry’s “Copper Canteen,” from his 2015 release Complicated Game. The author points directly to the song’s frequently quoted opening line as a representative passage in McMurtry’s work: “Honey, don’t you be yelling at me while I’m cleaning my gun.”

“Though that line about the gun got a big laugh when McMurtry played it in Dallas,” Ruth Graham writes, “I still don’t know whether to hear it as a joke or a threat, and McMurtry has never been one to offer the easy comfort of a straight answer.”

Additionally, while many fans consider McMurtry an overtly political songwriter (“We Can’t Make It Here Anymore,” “Cheney’s Toy”), Graham notes that he’s actually more concerned with the effect of policy on personal workaday matters. “McMurtry often writes about how seemingly distant political concerns nudge his characters’ choices and prod their psyches,” she says, “the stretched budget of the Veterans Affairs Department or the birth of a new national park’s consuming the neighbors’ land through eminent domain.”

Those living and visiting Austin during South by Southwest this week will have several chances to catch McMurtry, from his full-band showcase at Mojo Nixon’s Jalapeno Pancake Mayhem at the Continental Club to a solo gig at El Mercado’s Backstage. Fans on the East Coast can see him on his Stateside Solo tour later in March, which launches at the Clementine Cafe in Harrisonburg, Virginia on March 25 and routes throughout the region before concluding at New York City’s City Winery on April 2.

“Nothing makes you miss Waffle House like a couple of weeks in Europe,” says McMurtry, who has been touring abroad recently. “The term ‘Continental Breakfast’ is an oxymoron.”

“James McMurtry may be the truest, fiercest songwriter of his generation” —Stephen King

Bonnie Whitmore may have a heart of gold, an outsize personality and a roof-raising laugh, but don't be fooled: her debut album has a body count. No fewer than two men die by Bonnie's own hand over the course of the record: one of them is burned alive, one the victim of a knife that, in Whitmore's own words, "just slipped." Take a look at that album cover and consider what secrets she's trying to get you to keep quiet. And then think twice before you spill 'em.

It's all part of a grand plan - one methodically designed by Whitmore – from album cover, to album content. The songs concerns themselves with the slow disintegration of a relationship, and the album's title – Embers to Ashes – is meant to represent that story's painful arc – from the first fires of young passion to the scorched ruin of heartbreak. As a killer, Whitmore's the last you'd suspect: Embers to Ashes is full of sly, spry country music, whiskey-soaked songs that recall prime Loretta Lynn and early Neko Case and, in their more uptempo moments, Miranda Lambert at her rowdiest. But be warned: those revelers carry daggers, and there's a bit of arsenic in that glass of cherry wine. As Whitmore herself puts it, "Nothing says 'go to hell' better than a uptempo, catchy song!"

Whitmore learned her way around country music early, touring at the ripe old age of 8 with her parents and her sister in a traveling roadshow cheekily titled "Daddy & the Divas." "Basically, my dad had children so he could have a band," she jokes. "He really wanted a bass player, so I learned how to play bass. My sister played the violin."

Whitmore's father had a pilot's license – an accomplishment Whitmore herself would later achieve – so he'd fly the family to their gigs at remote Texas bars and overcrowded fall festivals. And though they were a family act, Bonnie often stole the show: "As a little girl with a big voice singing 'Gold Dust Woman,' a lot of times I'd get the biggest applause."

As much as she loved playing with her family, the older she got, the more she wanted to strike out on her own. "I started to realize that I loved playing music," she says. "So when I was 16 I started writing my own songs." As her teen years progressed, Whitmore began working as a session player with other local musicians, while still continuing to perform with her family from time to time. For her first proper statement as a solo artist, she wanted to do something conceptual – something that told a story from beginning to end.

"I wanted to set up the album so it's: 'Boy meets girl, they breakup, but then there's the kind of postscript. At the end of the album, you have to deal with the lingering memory of that lost love."

Whitmore realized that vision to a striking degree. The title track is the kind of rough-and-tumble country song that would do Kathleen Edwards proud, but its rollicking rhythms conceal a sinister message: "Well, the preacher said until death to us part/ so you're gonna have to pay for this broken heart." "Tin Man" barrels forward like vintage Liz Phair, Whitmore using the classic Wizard of Oz character to pillory a heartless ex. Its lyric is built on a sly double-entendre: "Replaced by a girl named Mary who shares my middle name" (Whitmore's middle name is "Jane"). "She Walks" is a sparkling, mid-tempo number with all the ache of Lucinda Williams or Gillian Welch, while "Cotton Sheets" plays out like bright update of Mary Chapin Carpenter's "Passionate Kisses," Whitmore cannily using its central metaphor to stand in for the tension between upper and lower class.

She's just as adept on the record's softer numbers. "You Gonna Miss Me" is a slow ramble Whitmore wrote around the time she was moving from Texas for a brief stay in Tennessee. "I was really concerned about how leaving was going to be, and I think I was hopeful that I was going to be missed," she explains. "Sometimes, if I'm really emotionally involved when I'm playing a show, this song can get me to the point where I'm almost in tears."

The album was cut in a marathon two-day session in the studio, guided by the sure hand of producer Chris Masterson. "Chris produced my sister's record, Airplanes" Whitmore explains, "and it's unbelievable the things that he pulled together when we worked together. He had such great vision -– he could hear sounds that weren’t there yet. I went into the studio with the intention of doing an EP, and he pushed me to do a full album."

The gambit paid off – Embers to Ashes is full of ragged, rugged, instantly memorable country songs, a document of a relationship where passion burns hot, bright and quickly, and danger looms like a thunderstorm in the distance.

"I'm so grateful I have songwriting as an outlet, because it lets me relieve some of my darker emotions," Whitmore explains. "Instead of going and maybe being a bit destructive, I just write songs instead. I know sometimes I write angsty songs, but that’s how I get the angst out." Then she pauses and adds, with a why smile, "Kinda makes you wonder about the people who write all those happy songs!"