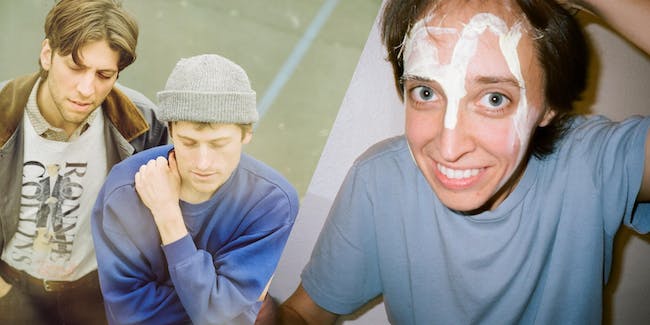 Hovvdy (pronounced "howdy") is the writing and recording project of Charlie Martin and Will Taylor. The duo, both primarily drummers, first met in the fall of 2014 and quickly bonded over a love for quiet music. Within a few weeks, they had combined songs and began recording their first EP in bedrooms and family homes across Texas.

By 2016 the two had committed to each others growth in songwriting and recording, resulting in their debut album Taster, originally released on Sports Day Records and reissued in 2017 by Double Double Whammy. They followed this in 2018 with the release of Cranberry , which Pitchfork described as, "Foggy, warm, and wistful, it sounds like faded time." Hovvdy has found a unique identity in rhythmic, down-tempo pop songs that are hopeful, yet melancholy; relatable, yet distinguishable.

Lomelda began in Silsbee, TX, in 2008, when Hannah Read found a few friends to play her songs with her. The project continues to follow this model, songwriting and friendship at the core, studying the distance between “you” and “me” with each new release.

Early recordings, mostly lost, include works such as ‘Late Dawn Inheritance’ and ‘Heavy Shadows’ as well as a wealth of pinhole microphone productions about family, religion, colors, dying, fantasy and finitude.

Lomelda’s first proper LP ‘Forever’ was released in 2015. Hannah collaborated with Zach Daniel (drums), Andrew Hulett (guitar) and Tommy Read (producer/engineer) to make this album. It is a highly dynamic and emotional rock band record that explores the endings of things—a friendship, a day, life.

After that release, out of a feeling of dissatisfaction, Hannah re- recorded the songs as a live performance on classical guitar. She, along with two close friends, commandeered a concert hall in Waco, TX, for the occasion. It was an effort for intimacy in a big empty space. That recording became ‘4E’ and was released in 2016.

The following year, Lomelda found new friends in record label Double Double Whammy. The project’s first release on the label came in September 2017—‘Thx’. This album features the introspective mood and dynamic range the band is known for with a new gentleness and balance; also featuring the drumming of Zach Daniel, production work of Tommy Read, and Hannah covering the rest. ‘Thx’ reached new audiences as Lomelda spent the next year and a half playing live across the US and Europe with acts such as Frankie Cosmos, Phoebe Bridgers, Big Thief and Florist.

Lomelda lead off 2019 with a new album called ‘M for Empathy’. With this taut song collection, Hannah reflects on communication and confusion—and attempts to come closer than ever. Hannah recorded the album with Tommy Read at Lazybones Studio in her hometown of Silsbee, TX, after a year of making a new home in Los Angeles.

with support from Small Jaw