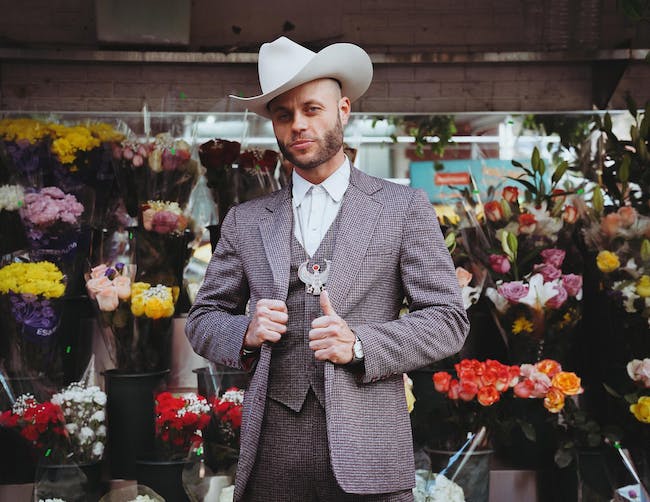 Charley Crockett’s been running nearly his entire life, but with the title track to his sixth album, the Texas songwriter looks back at where he came from. “The Valley” chronicles his hard upbringing on the south Texas border in San Benito and his single mom’s move to Dallas, but it also distills the essence of Crockett’s fierce and restless independence.

Recorded just a week before the songwriter went under the knife for life-saving open-heart surgery in January, the album stirs with an introspection and urgency to tell his story. It’s a story of an artist searching for his place in the world, absorbing the sounds of the country as he attempts to make sense of the struggles of America and life on the road. It’s a story of exile and promise, as Crockett now runs those same highways playing for thousands of fans.

With a pawn shop guitar that his mom bought for him when he was 17, Crockett taught himself to play. Summers in New Orleans with his uncle sparked his ear, while the Dallas blues and Valley’s Tex-Mex slipped into his bloodstream.

He lit out after high school and spent a decade living rough on the road. He worked the communes and farms in Northern California. He busked the streets of New Orleans and Memphis. He ran the subways of New York City, sleeping in abandoned warehouses and constantly in trouble with the law.

Those years were a blur of highways and train cars and cities for Crockett, but they taught him how to keep moving to survive and showed him a desperate side of the country living just below the surface. And all of it fused into his music.

When he returned to Dallas in 2014 with a self-recorded album in his hand, he found a thriving music scene emerging in Deep Ellum behind artists like Leon Bridges and the Texas Gentlemen. He hustled his LP to anyone that would listen, and people took notice.

One artist whose head was turned was blues drummer Jay Moeller, who convinced Crockett to move to Austin and introduced him to iconoclastic roots producer Billy Horton. With Horton, Crockett found a partner who understood his unique and versatile style.

“I think I found my sound with working with Billy Horton,” Crockett attests of his co-producer. “I really want to show people how soul music, classic country, and blues are all right there together. I’m thinking about the respect of the tradition, and I want to be proud of it. I made this record for that express purpose of choosing to stay in my roots and keep them up front and not let them get tossed out.”

Across six albums in the past five years, the Texan has defined his own distinct roots style. Even on his platters of deep-cut blues and country covers like Lil’ G.L.’s Honky Tonk Jubilee (2017) and Lil G.L.’s Blue Bonanza (2018), Crockett pushes a suave and soulful classic Americana that melds genres and is as restless as the artist himself.

His delivery hinges with New Orleans clip, and voice slides with slight lisp that melts around his phrasing like oil skirting the surface of a pond. His ear tunes an amalgam of East Texas blues, border Tex-Mex, classic honky tonk, and Louisiana soul, swerving effortlessly between weeping George Jones-worthy country ballads and hot smoked Lazy Lester-swaddled blues. And Crockett’s own songwriting, showcased on 2016’s In the Night and 2018 breakout Lonesome as a Shadow, cuts with an equally timeless quality.

No surprise then that Crockett has found a home base in Austin, with a deep history and appreciation for stylistic dexterity and transformational takes on traditional sounds. Like Doug Sahm’s cosmic roots blender or Gary Clark Jr’s blues shredder, or even Willie Nelson’s signature jazz country phrasing, Crockett effortlessly spins his influences into his own unique mix, let loose live with shimmying stage charisma worthy of Elvis or Jerry Lee Lewis.

Another artist who took notice of the sharp new songwriter was Turnpike Troubadours frontman Evan Felker, who instantly became a champion of his music after meeting outside a show at the historic Gruene Hall. Crockett became a frequent tourmate with the band, and penned The Valley’s opening track, “Borrowed Time,” with Felker while traveling from L.A. to Colorado.

“Writing with Evan was the easiest thing,” offers Crockett. “I’ve learned everything from Evan, and I feel very blessed to know him the way I do, because he’s just special. I became a headliner through opening for them. They showed me how to do it and still stay the kind of independent cat I am.”

That independence remains essential to Crockett. Although courted by major labels and big name producers, Crockett is determined to continue forging his own path. Along the way, he’s begun to garner critical praise from national outlets like Rolling Stone, Billboard, and NPR, and made his mark at major festivals ranging from Stagecoach and Pickathon to ACL and Newport Folk. This winter, Blue Bonanza hit #10 on Billboard Blues Chart and the Americana radio album chart.

At 35, Crockett still spends most of his time on the road, and he’s hardly slowing down. Even with his surgery, Crockett was back onstage within a couple months hot-stepping across SXSW. This summer, he makes his debut at the Grand Ole Opry as he sets out for headlining US and European tours. Crockett keeps constantly moving forward, even as The Valley takes a moment to reflect on his past.

“Being from the Valley, and traveling around the country and the world, and then playing Deep Ellum hard and being in Austin the past few years - it can be hard to know where you’re really from,” he says. “My story’s wilder than people can make stories up. These songs that I’ve written on this record, it’s all really autobiographical, and they’re about as much depth as I’ve been able to capture writing about myself.”

Or as Crockett sings atop a rumbling shuffle on “The Way I’m Livin’ (Santa Rosa)”:

“If the way I’m living seem like just a mess, believe me I would choose this life over the rest.”