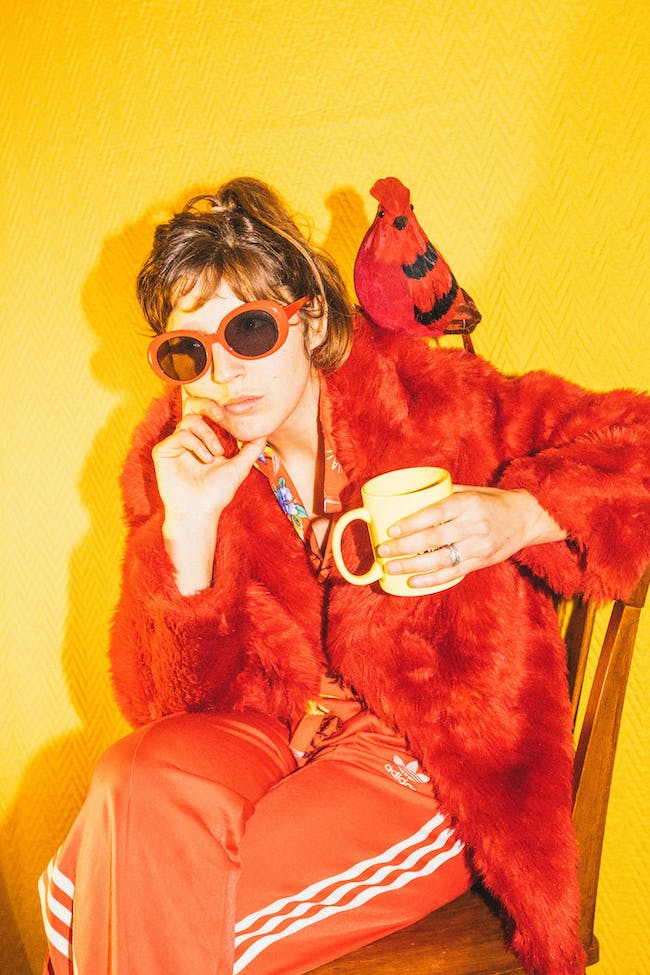 An obsession with money, an unfaithful lover, a friend’s accidental pregnancy, misogyny, loneliness, death… This is just some of the lighthearted subject matter that make up LONER––the darkly comedic second album from songwriter/producer Caroline Rose. Armed with an arsenal of new instruments and equipment, an ever-growing sense of “ahhh fuck it,” two years of exploration, and a wicked sense of humor, Rose delivers a set of serious songs wrapped in a sprightly, angsty pop burrito. Because, as Rose puts it, “Sometimes sad songs just need a cocktail.”

LONER captures the cheeky satire, comical musings, and often jarring mood swings––sometimes goofy, sometimes emotional––that make up much of Rose’s personality. “I call it Schizodrift,” she says sipping on a martini with her pinky out. “I want to make music that sounds as manic as I feel.” Filled with catchy synth hooks, Ray Manzarek-esque Farfisa, surf guitar, depth of thought and a punk attitude, LONER captures the energy of bands like Le Tigre and The Cramps, and nods to the styles of Blondie and DEVO, the pop hooks of icons like Justin Timberlake, all the while being inspired by the artistry of Kate Bush. “I’d say this album was as much inspired by Justin Timberlake and Britney Spears as it was late 70s punk.” How did she get here? According to Rose, the transition was natural.

LONER began about three years ago. “I was 24, lonely, and realizing life might actually be as hard as people said it was. Gandalf had yet to raise his staff and part the seas for me,” she says with a straight face. “I felt a bit disillusioned with my music; it didn’t sound like my personality. I hadn’t dated in years, I was going to lose health care. I felt detached from the modern world.” So what did she do about it? “I joined Tinder. I turned 25 and rented my first real apartment and painted it bright colors. I started socializing more and little by little, weeded out all my clothes that weren’t red. I embraced my queerdom. I had a girlfriend, we traveled the country, we broke up. I discussed politics, capitalism and Rihanna. For better or worse, I became a member of the modern world. Turns out the modern world is terrifying,” she says attempting to pluck an olive out of her glass.

When it came to writing about all of it, what followed marked the beginning of a fully formed Caroline Rose. “I needed to get more personal, more aggressive. more humorous and more sonically diverse than my older material,” referring to 2014’s slinky indie-folk-rockabilly-tinged album I Will Not Be Afraid. The record was penned over four years ago while Rose was living in a van traveling the country, and received critical acclaim from national press outlets like NPR and Rolling Stone. LONER, however, marks a significant leap forward both sonically and emotionally, unleashing a burgeoning confidence teeming with character. Asked how she’d describe the transition, Rose responds, “It just felt like a bubble inside me that had been growing and was about to pop.” In a burst of creative energy, she penned and produced a slew of songs that began circulating among labels and press, resulting in a Tiny Desk Concert for NPR Music.

Over the next year and a half, Rose “got super into production and mixing––I was working 10-hour days creating new sounds, finessing EQ, blending tones, sampling basically everything. Having an apartment [rather than living in a van] gave me the space to have more instruments than just a guitar. I started collecting synths and recording equipment and tracking my material. I signed with a label that gave me a lot of creative control and resources.” After sessions and meetings with over a dozen producers, Rose chose to co-produce alongside Paul Butler (Devendra Banhart, Michael Kiwanuka, Hurray For The Riff Raff) at Panoramic Studio in Stinson Beach, California and the studios of Butler and Rose. A multi-instrumentalist and producer herself, Rose brought to the sessions pre-recorded work the two used as a foundation off which to build, having written and arranged strings, played and recorded keys, guitar and bass, sampled layers of found and recorded sounds, and programmed synths and drums. “The rest was a lot of experimentation in the studio, trying out different sounds and getting weird,” She adds. “Paul added a lot in that way. Neither of us are afraid to try things and throw a bunch of sounds at the wall.”

Another thing that drove Rose to pursue production more seriously was the blatant lack of gender diversity in the music industry. “I noticed over the course of all these meetings there was not a single female or nonbinary producer. Then the more I read up on why, the more I realized there actually are a lot of us, we just aren’t taken as seriously and either don’t receive or don’t demand the credit that we deserve.” In response, Rose stepped up across the board, having a hand in mixing as well as directing creative control over all aesthetics regarding the album. “I wanted to make sure everything was as me as it could possibly be.”

According to Rose, the visuals and aesthetics of LONER are an important vehicle in bringing out her personality, as well as a lot of the more sarcastic elements within the music. “I’ve gotten really interested in the visuals over the years, from producing videos and creatively crafting the images to how I express myself via what I wear.” The video for “Money,” for example, written and directed by Rose and Horatio Baltz, depicts Rose playing all of the parts––a sort of maniacal, Coen Brothers-meets-David Lynch two-minute story involving three people (perhaps the same person?) that leaves viewers asking…What just happened? Not too different a feeling after listening to LONER, in fact. And this, is precisely how Caroline Rose wants you to feel.