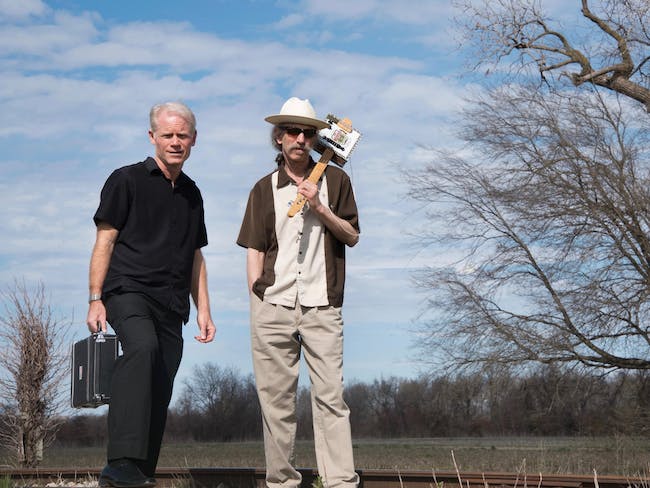 Adam Gussow and Alan Gross, a.k.a. The Blues Doctors, are Mississippi-based blues veterans who play a mix of down-home Delta standards and urban grooves from the Clarksdale-to-Chicago axis with some New Orleans funk thrown in. Since joining forces in 2012, they've transformed themselves into a two-man band with a bold and distinctive sound: Gussow on harmonica and drumset, Gross on guitar, with both men sharing vocal duties.

Roosters Happy Hour (2013), their debut, includes blues standards like "Next Time You See Me," "Rock Me," "Pride and Joy," and "Sweet Home Chicago," jazz and R&B favorites such as "Sugar," "Put It Where You Want It," and "Don't Get Around Much Anymore," plus a handful of originals by Gussow, including the Hooker-style boogie, "I Need Your Love." The album spent several months in the #1 position on Amazon's "Hot New Releases in Acoustic Blues" chart and hit #10 on the Living Blues national radio airplay chart.

The new Blues Doctors album, Same Old Blues Again, was released in May 2018.

Adam Gussow needs no introduction to blues harp fans. "One of the world's finest blues harmonica players" according to Philadelphia blues DJ Jonny Meister, Gussow is best known for his twenty-five year partnership with Mississippi-born guitarist and one-man-band Sterling "Mr. Satan" Magee as the duo Satan and Adam. Their releases include the W. C. Handy-nominated Harlem Blues (1991), Mother Mojo (1993), Living on the River (1996), and Back in the Game (2011). Gussow's solo debut, Kick and Stomp (2010), spent many weeks at #1 in the "Hot New Releases in Acoustic Blues" chart at Amazon mp3's and rose to the #2 position in the "picks to click" category on Bluesville (SiriusXM), America's premier satellite radio blues show. An author as well as musician, Gussow has written four award-winning books about blues literature and culture, including Mister Satan's Apprentice (1998), a memoir about his time as a Harlem street musician. His newest book, Beyond the Crossroads: The Devil and the Blues Tradition (2017), was published by University of North Carolina Press.

Alan Gross, who builds and plays his own cigar-box guitars, is best-known for his long association with Mississippi bluesman Terry "Harmonica" Bean--he played in his band for a decade--and work with hill country performers Kinneyy Kimbrough, Lightning Malcolm, and Eric Deaton. He's also gigged with Grammy nominee R. L. Boyce, a mainstay of Otha Turner's Rising Star Fife and Drum ensemble, and played numerous festivals across the state of Mississippi. His guitar influences include Muddy Waters, Duke Robillard, Jimmie Vaughan, and Warren Haynes.